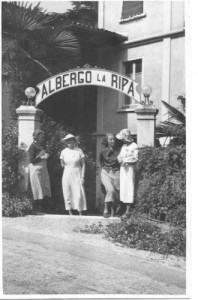 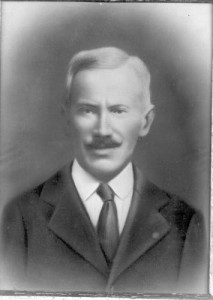 Carlo Cardini, born in Baveno on 28th sept 1831, married Margherita Tondina, born in Gignese on 9th Nov. 1838, and went to live in the old family house, behind the Marescialla brewery

Stefano, a professional stonemason for the quarry Cirla, turned the world (Egypt, France, Romania, Australia, Argentina, the United States) until 1906, when he married, on 8th Oct, Diverio Maria, born in Stresa on 7th Oct 1883.

Maria had moved from Stresa to Molino di Ripa with his family as his father, Gaetano Diverio, was a carpenter (the table used as breakfast buffet is one of his creations) and had his laboratory in the house that now is the dependance of the Borella / Mascarini villa.

Before getting married, Maria worked at the Chalet delle Rose, owned by Mr Henfrey widow, whose husband had built the Villa Clara (now Villa Branca); at his death she sold the Villa to the Earl Branca, retiring in the Chalet, where she opened a pharmacy, in which she used to distribute free medicines brought from England.

In 1906, at the end of his pilgrimages around the world, Stefano married Maria; they went to live in the house opposite to the current La Ripa.

After the birth of their first child, Carlo, Stefano was sent to Egypt to work

In 1909 decided to no longer leave Maria alone for so long: he boarded a ship bound to Boston, to contact the owner of the building that is now the hotel, to buy it.

Back home after 4 months of travel, he began to restructure, while in the building another activity was taking place, the Osteria de la rama seca, (Dry Branch Tavern), later moved to the actual Marescialla brewery.

Unfortunately, he found many troubles on his way: first of all the death of his eldest son Carlo, who died in 1918 due to the Spanish influence , then the various bureaucratic problems.

Meanwhile, the rooms were rented to the many tourists frequenting Baveno at that time.

Finally, on 24th May 1924, he was able to inaugurate La Ripa and began receiving guests who, since then, have cheered the rooms of this house.

Sadly, on 29th Dec 1932 Stefano died due to silicosis, a disease resulting in his work as a stonecutter.

His wife Maria took his place in the management of the hotel, with the help of the older daughters Gaetana and Nelly

The following years were very challenging. It was very heavy in those days for a woman with five children to run a hotel, but with courage and devotion, she managed to carry on the work begun by Stefano.

Since then, many people have spent some time within these walls: among these, the ones who have remained in the memory are the English Misses, who taught English to Gaetana. Unfortunately, they died just a few months apart from each other in 1936. They rest in Baveno Cemetery.

Another fact marked the life of this family. On 14 September 1943 the German troops commandeered the hotel and ordered Maria Gaetana and Nelly and the other sisters (Carlo had gone soldier) to retire in the kitchen and to remain closed in there, except to serve meals. This fact can be read in the book Hotel Meina. When the Commando finally retired, life in La Ripa returned to normality, until August 1952, when Maria died.

Gaetana, the eldest daughter, took her place aided by Nelly (who died on 29th march 1973), and remained at the helm of the hotel until 2013. On 8th March 2013 she left us peacefully, almost on tiptoe, as it has always been her life.

One thing is to remember: on 17th October 2012, celebrating her 100th anniversary, Gaetana wanted around her all her dear Clients who were her Family. Among these: Fam.Stiegele, Fam. Le Chapelain, Fam.Portier, Fam Hayer, Fam. Lieven, Fam Vandeputte.. just to mention a few who return each year to visit us.

That brings us to today … with the hope of having learned from Gaetana and from my Grandparents the Art of Hospitality, I welcome you into our home. Paola 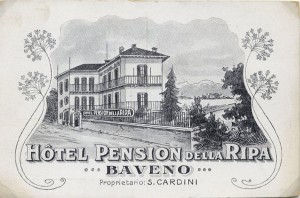 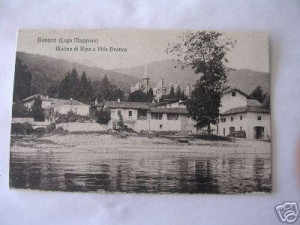 No description. Please update your profile.